With little more than a week to go before the local elections on November 24, a Taipei councilor candidate is suspected of vote-buying. The candidate, Chang Hsiu-yeh, was charged with violating the Civil Servants Election and Recall Act. She was barred from leaving the country and subject to residence restrictions after investigation.

Chang Hsiu-yeh is running for city councilor in Taipei’s Wanhua District. She is a member of a pro-unification group and is suspected of using money originating from China to buy votes.

Prosecutors said Chang spent US$10,000 on a lavish banquet to lure voters. She was also found using the money to arrange tours for Chinese spouses eligible to vote.

Chang denied any wrongdoing. She said the banquet was not aimed at certain groups as everyone was welcome to attend the event. She also said prosecutors should be held accountable if she does not get elected because there is no evidence to support their claim.

Meanwhile, a candidate for neighborhood chief in New Taipei City was released on bail. The candidate, surnamed Chen, was also suspected of vote-buying. In his campaign flyers, Chen promised to use his money to take out accidental death insurance for senior citizens aged between 65 and 99 for four years. Chen said his idea had good intentions. 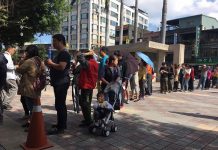