The defeat in Kaohsiung comes as an especially heavy blow for the party, which has regarded the southern city as a stronghold for two decades. After one of the most closely watched races of the evening, KMT mayoral candidate Han Kuo-yu beat his DPP rival Chen Chi-mai.

Better news came for the DPP in Taoyuan, where incumbent Cheng Wen-tsan won the mayoral election. The DPP also kept its two decade hold on the mayor’s office in the southern city of Tainan, a longstanding party bastion.

As of press time, results in Taipei’s mayoral election remained too close to call. 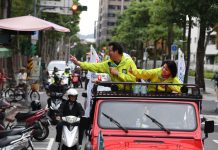