The International Olympic Committee has sent a third letter warning that Taiwan’s Olympic athletes could run into problems if the team name – “Chinese Taipei” – is changed to “Taiwan.”

Ever since 1981, Taiwanese athletes have performed under the team name “Chinese Taipei”, a compromise to appease China, which sees Taiwan as part of its territory. But voters are set to vote next Saturday on a referendum that – if passed – would push officials to try to change the name to “Taiwan.”

Baseball players put up posters opposing the referendum… they’re afraid they won’t be allowed to play in the 2020 Tokyo Olympics. The International Olympic Committee (IOC) has already sent a third letter warning Taiwan officials that they won’t approve any changes to the name “Chinese Taipei”.

“In order to safeguard the name ‘Chinese Taipei,’ even if the referendum passes, they will refuse to comply,” says Liu Ching-wen.

Although some say changing the name would make it hard for Taiwanese athletes to participate, Liu Ching-wen is not concerned.

“Even if Chinese Taipei loses its rights, it won’t affect the athletes,” he says.

But Director-General Shen says that even athletes who have qualified to participate, will still need approval from the International Olympic Committee.

For now, the issue is in the hands of voters, who are set to vote on the referendum next Saturday. 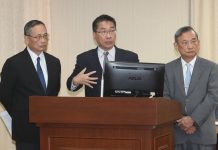