Taiwan’s 2018 elections are underway. Polling places across Taiwan opened at 8:00am (local time) on Saturday, with voting to continue until four in the afternoon.

Heavy traffic is expected on the roads and rails, as Taiwan requires voters to cast their ballots in the place where their family registry is located. For many city-dwellers, especially, this means a trip to another region of Taiwan.

According to the Central Election Commission, there are more than 20,000 candidates running for more than 11,000 offices.

This is a so-called “nine-in-one election”, which means that voters will be filling nine types of government positions. The positions range from mayors, county heads, and city and county councillors to more local offices like neighborhood chief. Since Taiwan includes an array of different types of jurisdictions, voters’ ballots will vary depending on where they are registered to vote.

In addition to voting for candidates, voters also have the opportunity to weigh in on ten different referenda. Topics include same-sex marriage, restrictions on food imports from Japan due to radiation fears, and the issue of the name Taiwan competes under in international sporting events.

The Central Election Commission expects to finish counting votes before 9:00pm Saturday. The commission also says it is likely to announce referendum results by 2:00am Sunday. 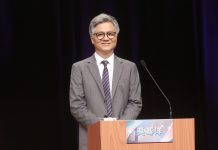