The three leading candidates for Taipei mayor are making last-ditch efforts to attract votes ahead of Saturday’s elections.

The independent incumbent, Ko Wen-je, is seeking a second term. His chief rivals are Ting Shou-chung of the opposition Kuomintang (KMT) and Pasuya Yao of the ruling Democratic Progressive Party (DPP).

The race for Taipei mayor attracts particular attention as two former mayors of the capital have gone on to serve as president.

Wu, the KMT chair, admitted having made inappropriate remarks about a female politician. But Ting, the candidate, says he doesn’t believe the gaffe will have a bearing on his prospects come Saturday.

Meanwhile, DPP candidate Pasuya Yao held a press conference urging the public to ditch incumbent mayor Ko Wen-je and throw their support behind him. Yao is playing on a perceived friendliness towards China on Ko’s part, based on a remark from the mayor that “China wants him to run for president.”

On the same day, Mayor Ko and his staff went to a traditional market. But while he received a warm welcome from vendors, a protestor shouted at him over pension cuts.

The mayor says he finds claims of his alleged presidential ambitions to be troubling. Ko said he does not have funds or any campaign infrastructure for a presidential bid and has no plans to run for the nation’s highest office. 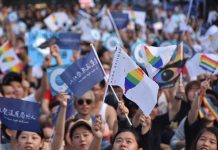